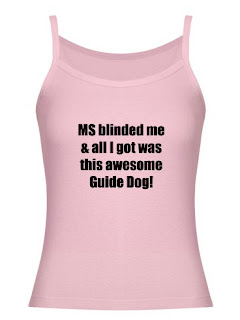 *The above image is a thumbnail of the pink spaghetti strap tank top I had specially made from L^2. She designed the shirt for me after I mentioned on Twitter that I needed a top for the MS walk. On the light pink shirt is bold black print that reads: MS blinded me and all I got was this awesome guide dog. You can find a link to L^2’s shop on the above link. thanks, L^2!*

I didn’t write on the twelfth last year, so today’s post is dedicated strictly to the MS walk Jayden and I participated in today with my good friend L. She picked us up at 8:30 this morning so we’d have plenty of time to arrive at the park and begin the walk at 9:30.

I had a backpack laden with water for Jayden and Gatorade for me, along with some peanuts in case I got to feeling weak and the usual guide dog supplies. I also limited myself to one cup of coffee that I saved from the day before to keep us from encountering mafia guy bladder halfway through the two mile walk. 😉

It was a rough start when we arrived, since many walkers were there with their pet dogs. I’m pretty sure Jayden was the only guide dog, but only because the people I was with didn’t mention any others.

Just trying to walk from the car to the registration area was next to impossible. Jayden just would not concentrate. Obedience didn’t work, so on went the Gentle Leader, which L laughed at, watching Jayden’s demeanor change haha! After that, he was whipped into shape and did great.

While we were registering, one of the people at the desk must have read my shirt because he asked when I was diagnosed. We had a brief chat and then joined L’s friends from work, who had come to walk it with us. They were really cool and totally fawned over Jayden while asking me questions about how I stay healthy and keep my balance and such. I explained that exercise has done wonders for me.

We stood and chatted for a bit and then things were getting underway. There was talking over a loud speaker, but I’m not sure what they were saying. Lots of people were cheering and a band started playing to send us off.

At first we were in quite the cluster of people, but eventually it thinned out and we were able to pick up our pace. Though there were tons of things to see, Jayden showed me every curb and step until we were on level ground. L’s friends got a kick out of watching him and I kept hearing them exclaim from behind us.

Once we really had a clear path, I put on my excited voice and slapped my leg, giving the high pitched hop up command. Jayden started literally trotting. It was so awesome! We kept having to slow up and go around people, but once we had the all clear again, Jayden began trotting happily. I’m not sure I’ve ever really felt that much spring in his step, at least not for long periods of time. Thinking back on it, this is definitely the longest we’ve walked just out and about, not stopping to shop, or out on a lesson with Dave. It was so incredible. I really got to just walk with my dog.

The weather was beautiful until we hit a patch that was in direct sun with no breeze. It was probably a little over halfway through the walk. I decided we needed a water break and Jayden agreed, lapping it up and then rubbing my leg with his face. I decided to take the GL off since he’d gotten into his rhythm. It had really been awhile since we’d done anything other than our usual walks and Saavi trips, so I wasn’t angry that he had been hard to control in the beginning.

As I watered myself and Jayden, L explained to her friends about how important it is that I not get overheated or too fatigued. We set off again and I tried pushing Jayden but he disobeyed me.

One of the things I have gotten out of Jayden that wasn’t part of the deal, and something I haven’t really mentioned here, is his ability to alert me to coming fatigue. Dave noticed it a few times, where Jayden would slow down and Dave could see me starting to fade, but I haven’t noticed it without Dave until today.

Jayden will absolutely refuse to let me push him. The first time Dave noticed it, I said Jayden must be tired. Dave informed me that no, Jay could probably run a mile, but I was fading. So today, when Jay disobeyed, I obeyed him and sure enough, about five minutes later, I felt the fatigue try to set in.

I thought the two mile walk would be a breeze, since I do two miles twice a week at the gym. However it’s one thing to do two miles on a treadmill in an air conditioned room, and a completely different thing to do two miles outside in Arizona in March on non-level ground while working a guide dog and paying attention to where we needed to go. We even had a few street crossings, which I did human guide through, since the first one freaked me out haha! I didn’t think to make my friends stand and wait with me while I read traffic, and when L said to go, I couldn’t tell where the traffic was and freaked out. Because of the way we travel on a daily basis, we don’t do many street crossings, so I was out of practice.

So back to Jayden refusing to walk as fast as I wanted; it was just incredible to really see him alert to my fatigue. Wow. Are these dogs smart or what???

We heard music in the distance as we approached the finish and L and I were singing silly tunes from our old choir days. As we drew closer, people were there cheering us on, telling us we were almost done. Jayden got a little distracted right at the finish and ran me into a person, but they were good natured about it and then we walked under the arch of balloons, completing the walk. People were cheering and Jayden was panting and my legs felt like jello haha!

We said goodbye to L’s friends and found some shade to give Jay some more water. Then we loaded into the van on our way to Starbucks! Oh how I craved coffee, having not had my fill this morning.

I got an iced venti mocha no whip, my favorite, and Jayden got a cup of ice. He practically ordered me to move my leg so he could sprawl out in the front floor well at my feet haha! I gave him a piece of ice between my sips of coffee and L and I talked about trying to do a walk every other Saturday or so. I sure hope we do that. It was so awesome to be out walking with Jayden in a safe place with my buddy. And Jayden just loved it. I love that bouncy feel in the harness handle.

When we got home, Jayden enjoyed his frozen Kong while I did my stretches. I could feel the ache in my shins like I had at GDB, so I made sure to do the yoga stretch for that along with my normal quad and hamstring stretches. I called Gamma to let her know how it went. After that I filled B in and called Georgie. Both Jayden and I still had energy, but it didn’t last haha!

I got on the computer for a bit and Jay crashed on the tile and then my body ordered me to the couch where I crocheted on the first blanket for Japan.

At one point I got up and Jayden took my spot. When I came back I had him move to the other side which he did, but then promptly put his head on the pillow where I was about to lean back. I didn’t have the heart to move him, so I just stretched out beside him and leaned back on the arm of the couch. He was so passed out that he didn’t even realize it was dinner time. B and I said “food” a few times and Jay just looked at us. Finally I got him to get up long enough to eat and relieve, and now he’s back on the couch as I write this.

It was an incredible day and it wore me out more than I had expected. I felt even more satisfied than I do even when I kill in the gym at Saavi. Not only did I get to walk with my dog and my friend in the beautiful fresh air, but I got to walk for my disease. I didn’t really chat with anyone other than that first guy, but we were all there for the same reason. Not everyone there had MS, but those who were there care enough about it to come and raise money for it. If I find out how many turned out, I’ll update with the number. It definitely felt and sounded like loads of people.

Now I’m off to finish my coffee and crochet some more. My body still feels rather tired, but it’s such a good tired feeling. It’s good to give up some spoons for the cause of finding the cure for the spoon thief.